In April, Showtime Sports announced a four-part docuseries masking a golden period of boxing within the Eighties headlined by Sugar Ray Leonard, Marvin Hagler, Roberto Duran, and Thomas Hearns. Referred to as “The 4 Kings,” the fighters competed in 9 championship bouts amongst one another.

Roughly two weeks earlier than The Kings premieres on Showtime, the premium cable community has launched a trailer and poster artwork for the docuseries which is able to air on 4 consecutive Sunday nights.

Because the documentary chronicles, boxing was affected by decreased curiosity following Muhammad Ali’s retirement. On the similar time, the USA economic system was going from recession on the finish of Jimmy Carter’s presidency to a rebound whereas Ronald Reagan was within the White Home. Boxing skilled an identical upturn with the emergence of 4 fighters, every from totally different backgrounds with compelling backstories.

Take a look at the trailer for The Kings:

For a lot of longtime boxing followers, the “4 Kings” period is outlined by the three fights between Leonard and Duran, the second of which lives in infamy due to Duran’s “No más” give up within the eighth spherical.

However Hagler’s 1985 bout with Hearns is taken into account among the best of the Eighties, The battle lasted solely three rounds, however is remembered for the savage exchanges between the boxers. Two years later, Leonard and Hagler fought in match that led to a controversial break up choice, one which reportedly compelled Hagler to give up boxing.

As talked about, Showtime additionally launched poster artwork for the sequence. A lot of it may be seen within the trailer, however right here is the picture in full: 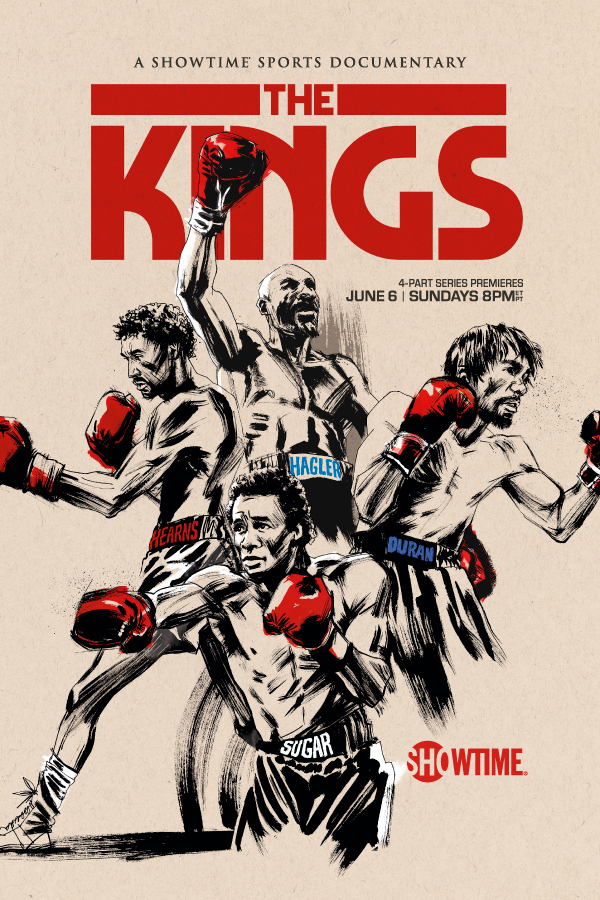 THE KINGS is produced by Field To Field Movie in affiliation with Ingenious Media. The sequence is govt produced by James Homosexual-Rees (Amy, Senna, Drive To Survive) and Paul Martin (Diego Maradona, Drive To Survive), produced by Fiona Neilson (Oasis: Supersonic, Coldplay: A Head Stuffed with Desires) and directed by Mat Whitecross (Oasis: Supersonic, Highway To Guantanamo, Coldplay: A Head Stuffed with Desires).

Government producers James Homosexual-Rees (Amy, Senna) and Paul Martin (Diego Maradona) have spectacular documentaries on their respective resumes and in addition collaborated on Netflix’s System 1 docuseries, Drive to Survive. Director Mat Whitecross additionally has loads of expertise with documentaries with Oasis: Supersonic, The Highway to Guantanamo, and Coldplay: A Head Stuffed with Desires on his filmography.

The Kings premieres Sunday, June 6 at 8 p.m. ET on Showtime and also will be accessible throughout the premium cable channel’s streaming platforms and on-demand. Subsequent episodes will air in every of the next three weeks.